Back in the 1970s, when backpackers to Southeast Asia were first discovering Ko Samui, magic mushrooms were on the menu and a basic thatched hut with running water and electricity were about as luxurious as it got. What a difference 40 years makes. Today, the mushrooms have been replaced by fancy wine bars and night clubs, and the island is home to some of Thailand’s most luxurious resorts.
Down to onward travel

With an international airport, a mass of ferry connections and more than 1,000 hotels and guesthouses, Ko Samui is not somewhere to come to glimpse a corner of the Thai kingdom untouched by tourism development. Rather, this is a place to witness first-hand the unwieldy juggling act Thailand is trying to pull off as it strives to attract literally millions of new tourists annually while struggling to maintain some semblance of sustainability (and/or sanity).

Late light on Bang Po. Photo taken in or around Ko Samui, Thailand by David Luekens.
Late light on Bang Po. Photo: David Luekens
Two theories compete to explain where the name “Samui” came from. The first is that it is derived from a commonly found tree called a “mui”; the second that the name comes from the Chinese word “saboey”, meaning ’safe haven’, which it was to the original fishermen who made port here in the Taling Ngam area.

Malay fishermen from the mainland as well as immigrants from Southern China saw prosperity in a surrounding sea teeming with fish and limestone outcrops filled with swift nests. Their legacy can be seen in the trading houses of Hua Thanon and Fishermen’s Village, along with several Chinese temples dotted around the island and a raucous celebration of Chinese New Year.

Over the years, the island’s fishing industry has been superseded in importance by that of coconut plantations. By 2006, the island exported more than two million coconuts per month to the Thai mainland for processing. While the island’s hinterland is still given over to coconuts these days, the beaches have been repurposed to host an even more lucrative crop: tourists. 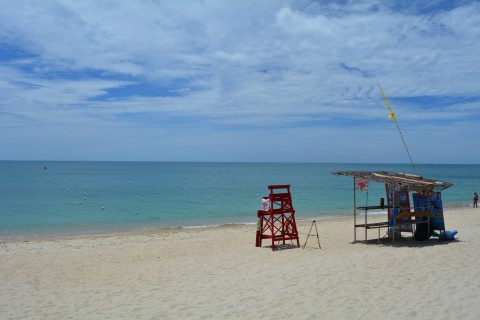 This new crop is peculiarly tied to coconuts in one way: An island-wide law states that no building may be taller than the nearest coconut palm. This means that, unlike Phuket, tall apartment blocks and hotels do not blight the skyline. The highest building is about four storeys – which, truth be told, is still taller than most coconut palms we’ve seen – and up until recently, bungalow-type accommodation was the most common across Ko Samui. Sadly though, across northern stretches of the island, you’ll see new developments going in that are stretching the credulity of the coconut palm rule.

Plenty of space on Mae Nam. Photo taken in or around Ko Samui, Thailand by David Luekens.
Plenty of space on Mae Nam. Photo: David Luekens
With more than a million visitors a year, Ko Samui’s inadequate infrastructure is at breaking point. Local government has spent big on improving infrastructure such as roads and drainage after floods in 2010 and 2011 proved that there was a need for drastic improvement, but still, five years later, Chaweng and other popular areas continue to flood after heavy rain. Like Phuket, the island lacks any form of public mass transit, aside from shared songtheaws and private minibuses. Road accidents are the number one cause of tourist deaths on the island. Always wear a helmet when riding a motorbike.

The many facets of Bophut. Photo taken in or around Ko Samui, Thailand by David Luekens.
The many facets of Bophut. Photo: David Luekens
Bangkok Airways, which has a monopoly on air traffic to Samui thanks to it owning the only airport on the island, sees Samui as a hub for mainland Chinese travellers to Thailand. In 2016 it was planning numerous direct routes between China and Samui. How this new influx will impact Samui’s already punch-drunk infrastructure is grounds for serious concern.

Despite the crowds and overdevelopment, if you’re hunting for white-sand beaches, turquoise waters and all-day sun, Samui can be a fine choice and our Ko Samui travel guide should help you to find the best beach, guesthouse or hotel for your needs. Use Samui as a base to explore the neighbouring islands of Ko Pha Ngan and Ko Tao, as well as the Ang Thong National Marine Park. The islands and the park are all just a ferry trip away.

Big skies on Lamai. Photo taken in or around Ko Samui, Thailand by Stuart McDonald.
Big skies on Lamai. Photo: Stuart McDonald
Before the crowds drag themselves out of bed, popular Chaweng and Lamai remain pretty, while on the north side, quieter Mae Nam has a growing reputation. Of course there are many other beaches worth investigating, such as Choeng Mon and Bophut, and quiet secluded bays in the west and south-don’t make the mistake of spending your entire Ko Samui sojourn on just the one stretch of sand.