It is another highlight of Surat Thani. That encourages both Thai tourists And foreigners to visit Koh Samui, Surat Thani. Also neighborhood provinces to participate “Samui Festival”, which will be held this year. To celebrate the 120th Anniversary of Samui Island by Surat Thani with Thai Beverage Public Company Limited and the cooperation with the Ministry of Commerce. And the Ministry of Tourism. Jointly organize “Samui Festival” 2 times. Between 7-11 September, at Koh Samui, Surat Thani. By holding a press conference for the event. On Thursday, June 29, Pacific City Club, with Somchai Sonthijiravong, Deputy Commerce Minister, Yut Sakasuporn, the Governor of Tourism Authority of Thailand, Uchai Innnak, Surat Thani Governor, Kamolai Chai Chian. Assistant Managing Director of Thai Beverage Public Company Limited, Amrit Chusuwan, Dean of Faculty of Painting and Graphic Arts M., Fine Arts, Thaihotel Lee gems emanate from the agent channel 3 and musical director James raises your job. Contribute to the event details.

The second Samui Festival special event will feature a variety of activities. To celebrate the Koh Samui area. Including color And a variety of new visitors will come to experience new experiences at the main stage at Nathon, Chaweng and Bo Phut markets, which will feature five days and nights from September 7-11, which includes the following activities:

• The merits of the whole island are traditionally passed on to the temples at 7 temples, 7 temples in the morning of Thursday, September 7, which are special. “Merit to eat fire”, which is a bowl of food made by the fireplace only.
• The magnificent flowering carriage procession consists of many beautifully decorated flowering carpets by private entrepreneurs. And government agencies Thai Cultural Show Organize a grand procession to appear to the eyes of the world. On Thursday afternoon, September 7, the parade through various tourist attractions. Then gather at the ceremony at Nathon.
• Concert And local art show Manohra Shadow Show, Contemporary Art And other performances. Includes concerts at Nathon Market. And Chaweng Beach Stage. Samui’s most famous tourist area.
• Thai Boxing Tournament Every night for 4 nights from September 7-10 at the platform of Bo Phut, another important tourist attraction of Samui.
• Food Street, show and distribute food of people in various areas. Both on Koh Samui And the districts of Surat Thani are hard to find. For example, demonstration of burned rice wrapped in Mared leaves in a bamboo cylinder. To stir fresh caramel Demonstrate eating fresh oysters properly to get full enjoyment. Including the famous fruit of the province to show.
• Art Lane Contemporary Art By artists from all over the country And local artists led by A. Amritr Chusuwan.
• OTOP Exhibition And folk handicrafts Of the various districts. In Surat Thani And Top Oop from other sectors.
• Exhibitions of government officials. To support tourism such as village funds. National Bank, SME Bank, Tourism Authority of Thailand, Food Street and Art Lane. There are three exhibitions at Na Thon Chaweng and Bo Phut.
• The “Samui Festival Marathon” competition will be held on Saturday, September 9, at 3:30 pm.
• Free Buffet Dinner on Chaweng Beach to create the “Longest Beach Buffet in the World” for dinner. By the cooperation of all Koh Samui tour operators. On Saturday, September 9
• The “Long Distance Cycling Tour” around the island won the Prime Minister’s Prize on Friday, September 10 at 6.00am.
For the trophy, General Prayut Chan-Ocha “Samui Festival Marathon” and the competition. “Long distance bike around the island” is a precious artwork designed by the renowned artist Sak Wuttimanee, a well-known celebrity.

Welcome to Ko Samui Ko Samui is like a well-established Hollywood celebrity: she’s outrageously manicured, has lovely blonde tresses and has gracefully removed all of her wrinkles without more than a peep in the tabloids. She’s been in the tourism business longer than almost any other Thai island, but rather than becoming passe, she’s embraced... View More 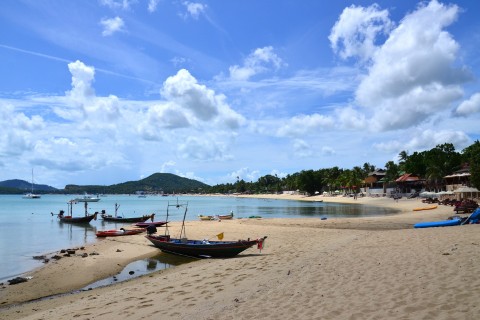 Ko Samui, Island in ko Samui, Thailand Back in the 1970s, when backpackers to Southeast Asia were first discovering Ko Samui, magic mushrooms were on the menu and a basic thatched hut with running water and electricity were about as luxurious as it got. What a difference 40 years makes. Today, the mushrooms have been... View More

Chaweng Beach Nightlife The night scene at Chaweng beach is as vibrant and lively as typical Koh Samui nightlife truly is.   The fun simply never ceases, what with the great places to explore and people to encounter. Chaweng happens to be one of two locations (the other one being Lamai), where party owls out... View More
View More
[/vc_row]